Postage Stamp Beginnings
It is said that a schoolmaster in England invented the adhesive postage stamp in 1837 that led to the first postage stamp being issued in England in 1840. Shortly thereafter in 1847 the United States issued its first postage stamp. In the 1890's the U. S. Post Office wanted to increase revenue and came up with the idea of creating stamps that would appeal to people that liked to collect things. The idea was to issue postage stamps that commemorated a person, place or event that would serve as postage for a letter or package and that would also appeal to people as a collectible item. The idea proved to be quite successful in raising revenues and since that time all countries issue commemorative stamps, in fact probably the vast majority of postage stamps are commemorative stamps. In time the subject matter was expanded to animals, insects, and plants which of course includes orchids.

The first postage stamps that included an orchid on them were issued in 1905-1907 by the Carribean island of French Guadeloupe. The set of six stamps featured Vanilla vines with beans across the upper part of the stamp and a picture of Mount Soufriere in the center. The stamps were issued in values of between 1 and 15 centimes and each stamp was printed in one color depending on the value as illustrated here with the two centime stamp. The stamps were issued again during 1922-1927 in the values of 5 and 15 centimes

The second country to issue postage stamps that included an orchid on them was French Reunion in 1933. These stamps featured a Coat of Arms of the island country of Reunion that was surrounded with Vanilla vines with beans similiar to the French Guadeloupe postage stamps. Like the stamps issued by French Guadeloupe these stamps were issued in values of between 1 and 15 centimes and printed in one color depending of the value as illustrated here with the 5 centime stamp.

It is fitting that these earliest orchid postage stamps commemorate the early participation of both these countries in the growing of the vanilla orchid for the perfume and food industries. On these first orchid stamps however, only the orchid plant is featured, there were no orchid flowers on these stamps.

The earliest postage stamp to feature an orchid flower appears to have been issued by the Manchu State in China in 1935. They featured a monochrome line drawing of Cymbidium virescens in the middle of the stamp as shown in the two examples here. The stamps were issued in values of between 1 and 15 fen and each stamp was printed in a different color depending on its value.

The differences that stamp collectors look at can involve the image on the stamp, as it may be printed offset, upside down or in a non-standard color. The stamp may be perforated at a different count then when it was first released or it may be an inperforate issue meaning it lacks perforations. The last difference mainly applies to older stamps, that of the value or denomination of the stamp. As noted for the early orchid postage stamps above, the same image was used with different colors and denominations, however for sometime now most if not all postal services use different images for different denominations.

Up to this point orchid stamps featured either the vanilla plant, with vines and beans or a line drawing of a flower, all using monochromatic colors. In 1937 the small Central American country of Costa Rica would issue a postage stamp that would feature a life-like, colorful image of Cattleya skinnerii.

Since this colorful postage stamp in 1937 there have been thousands of postage stamps issued by many countries. Many have featured life-like representations of orchids, whereas others have used line drawings.

How Many Postage Stamps? 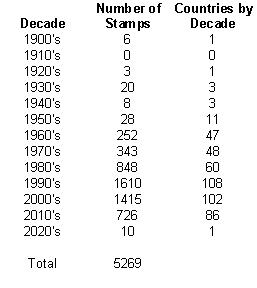 Since 1905 there hae been almost 5,300* orchid postage stamps issued by 203 different countries. Of the 203 countries 51% of them only issued orchid stamps in either one or two years, 18% in either three or four years, 23% in between five to ten years and 8% in between eleven to seventeen years. Sao Tome and Principe topped the list by issuing orchid stamps in seventeen different years and Guyana has issued the greatest total number of orchid stamps with 589 stamps that were issued in fifteen different years.

* The above noted statistics were gleaned from the StampWorld.com website, however it is possible that not all postage stamps that have featured orchids on them were included. 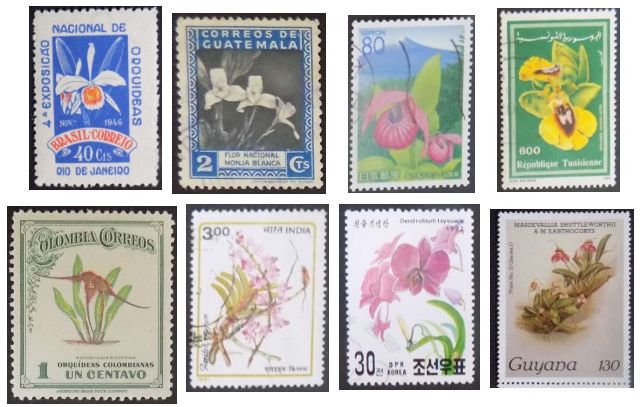 First-Day Covers are a combination of a stamp or stamps on an envelope, many times with colorful graphics or text on the envelope, that are issued on the first day they are released by the postal service. An example of a First-Day cover issued by the postal service of Singapore for the 20th World Orchid Conference held in Singapore in 2011 is shown here. Stamps featured Vanda 'Miss Joaquim', Renanthera '20th WOC Singapore 2011', Dendrobium 'World Peace', Cyrtocidium goldiana and Grammatophyllum speciosum. 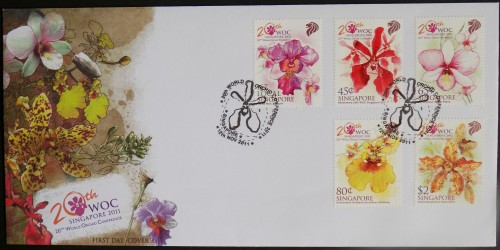 Souvenir Sheets are a combination of colorful graphics and a postage stamp or stamps. Usually the actual postage stamp or stamps will be located somewhere in the graphics and will be perferated so that they could be removed from the sheet and used as postage. Some souvenir sheets are not perforated and therefor are meant to be a collectors item. Here are some examples, Moldova features Cypripedium calceolus, Uganda features Ancistrochilus rothschildianus and St. Vincent and The Grenadines feature Oncidium urophyllum, Oeceoclades maculata, Vanilla planifolia, Isochilus linearis, Ionopsis utricularioides and Nidema boothii. 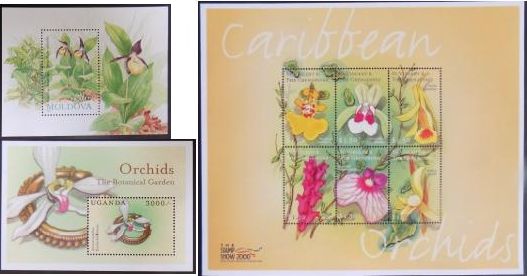 The Se-tenant Block is a different example of multiple postage stamps. The word 'se-tenant' is translated from French as meaning 'joined together' or 'holding together.' The stamps will differ from each other by design, or denomination and yet will be printed on one sheet. The souvenir sheet from St. Vincent and The Grenadines above would also be considered a Se-tenant Block because of having multiple stamps. Another example of this is shown here from the Russian Republic of Tenan that was issued in 1995. As above each stamp is different, of a different denomination, printed together on one sheet, however all graphics are confined to the individual postage stamps. It features Coelogyne ovalis, Miltonia clowesii, Restrepia cutulatta, Trichocenorum trigrinum, Paphiopedilum sukhakulii and Dendrobium phalenopsis. 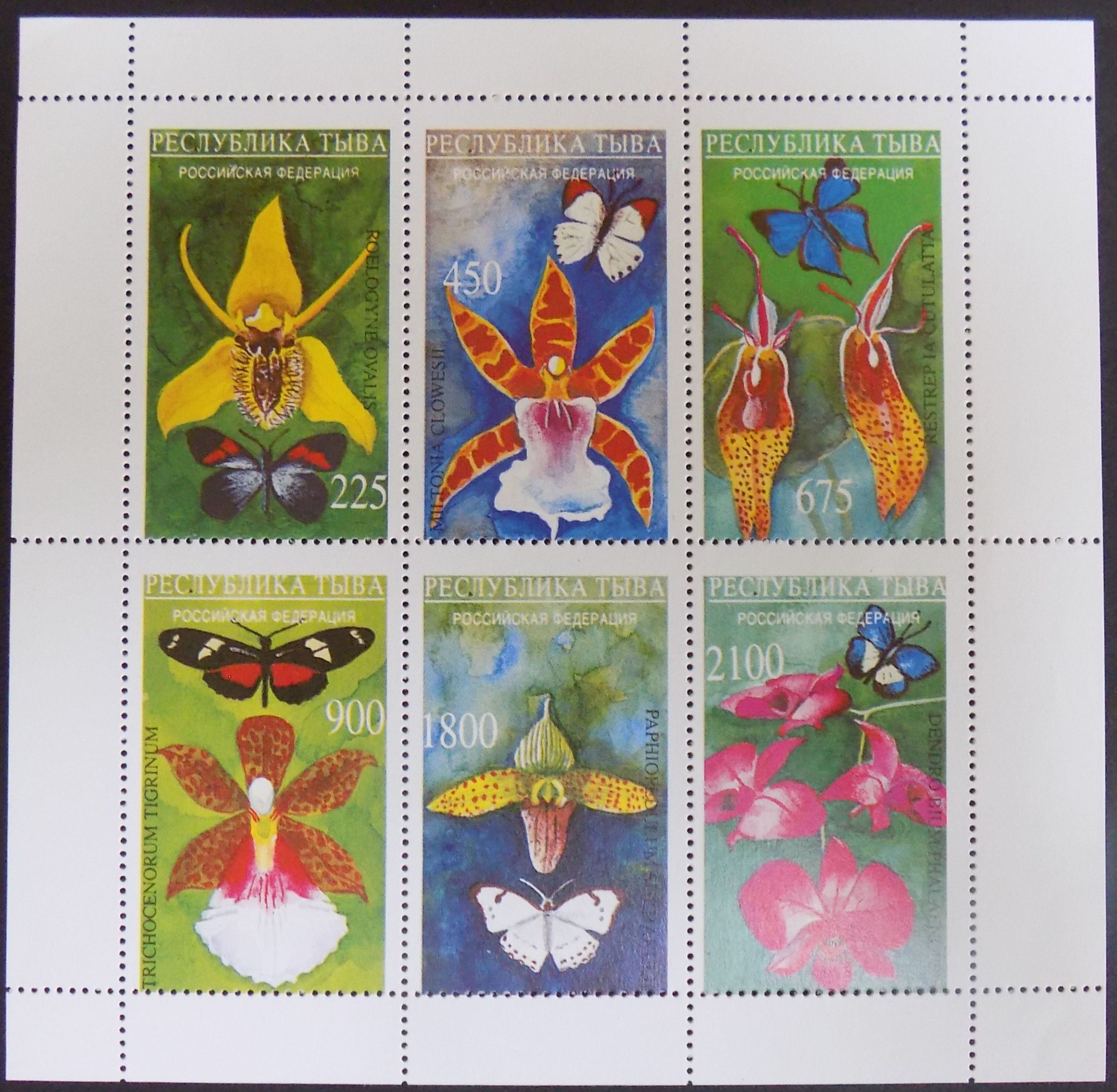 Why Collect Orchid Stamps?
For one thing orchid postage stamps are always in bloom, they don't take up a lot of room and you don't have to water or fertilize them. Orchid stamps can provide an incentive to research and learn about the orchids that are on the stamps. For instance: Is this orchid endangered in its natural growing area? Is it endemic to the country that issued the stamp? How big is the orchid plant and the flower? Is it an epiphyte or terrestrial?

Collecting orchid postage stamps can provide a non green-thumb individual an opportunity to have and learn about the beauty, diversity and fascination of orchids. Or it can offer the orchid grower a different way of appreciating the plants that they enjoy growing.